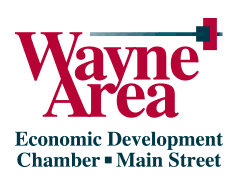 Wayne is a community blessed with a unique blend of industry, agriculture and higher education. Lured by a desire to acquire a tract of land upon which they could build homes of their own, the early settlers of northeast Nebraska crossed the wide Missouri River and turned their prairie schooners toward the vast rolling hills of a new land.

They continued westward undaunted by the extremes of summer heat or winter blizzards, the lack of food or fuel, illness and other perils. The first settlers in the Wayne area arrived from Lee County, Illinois, in the spring of 1869 and were joined by a second group in 1870. The prairie village of Wayne saw its beginning in 1881 when the railroad extended a line through the County linking Norfolk, Nebraska and Sioux City, Iowa.

The attraction of the railroad induced many settlers to move to the new community. Wayne was originally named Brookdale by railroad officials, but the settlers prevailed upon the company to name the community the same as the County, in memory of General "Mad" Anthony Wayne of Revolutionary War fame.